The raw material for the BIRD CRY score was selected from a list of mnemonics and onomatopoeias collected from bird books and archives, and from suggestions made by ornithologists, friends and bird lovers. The score is a carefully selected list of these described bird calls.

Each call on this list was freely interpreted by the musicians involved. Their calls were recorded and assembled by Boyd into the BIRD CRY composition and heard through many small speakers in the work. The sound was mixed to move around 5 separate channels to give listeners a feeling of space.

The Bird selection was made for both musical and thematic reasons. The descriptions needed to work as triggers to challenge and excite the Musicians imaginations and to provide a rich pallet of sound for the composition. Each musician was recorded in isolation with only the score to guide them. They endeavour to recreate a lost language of the birds.

Status: Possibly locally extinct Greater Southern Sydney. Uncommon to rare; endangered in many parts of range by loss of habitat in excessively frequent fires. Voice: ‘series of piercing, ringing, resonant whistles, rising in steps, each note flowing on almost unbroken, but abruptly higher than the preceding; or lower notes at a more even pitch. Cheerful budgie-like warbling and sharp, rapid trills.’

Status: Common Voice: ‘an extraordinary jumble of notes one of which has been interpreted as 4 o'clock’

Status: Common Voice: ‘The basic, or Type I, song is a 1–4 second high-pitched reel consisting of 10–20 short elements per second.’ ‘A vigorous trill, beginning squeakily, but quickly strengthening into a strong, downward cascade of louder, less sharp musical notes.’

Status: Critically Endangered thought extinct but rediscovered in 2005 in the Pilbara region of Western Australia Voice: from a captive once held at Melbourne botanical gardens: ‘as yet it has not been heard to utter any sound except a “Faint whistle” Gould’

Status: Extinct. A meter-high flightless bird found on Mauritius. Its forest habitat was lost when Dutch settlers moved to the island and the Dodo's nests were destroyed by the monkeys, pigs, and cats the Dutch brought with them. The last specimen was killed in 1681, only 80 years after the arrival of the new predators.

Voice: ‘probably “doo doo” though ‘duodo’ is idiot in Portugese’

Tracks 12-14 are based on the Olympian number of notes produced by Wrens! The Winter Wren can produce 100 separate notes in 7 seconds with a repertoire of up to 30 different songs. We recorded our local Superb Blue-wren, slowed it's call down to 1/4 speed and transcribed the call. It produced 187 notes in 6 seconds! The transcribed call was played by each of the musicians. Track 14 is the Wren's call at 1/4 speed, track 13 is the musicians playing the transcribed call, and for track 12 the musicians' calls are sped up to the same speed as the original Wren's call.

The transcribed call of the Superb Blue-wren 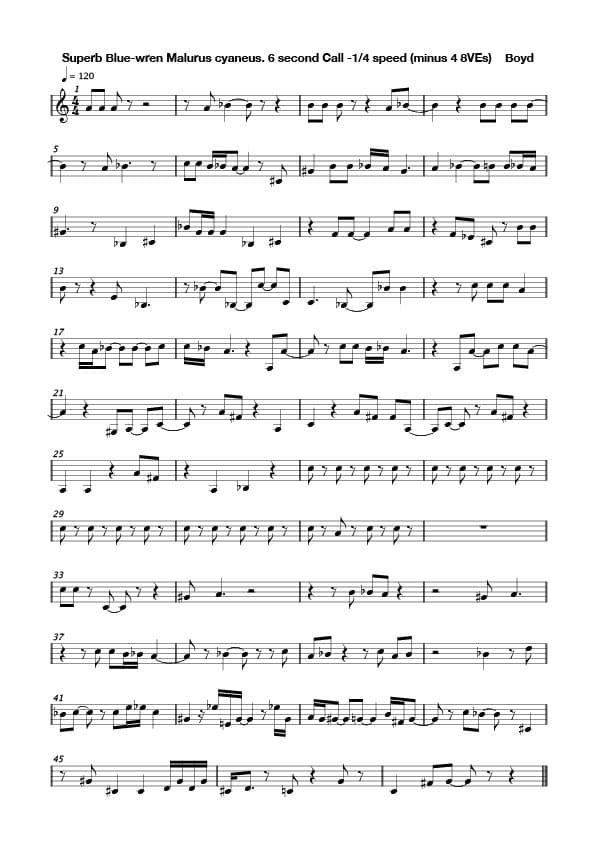