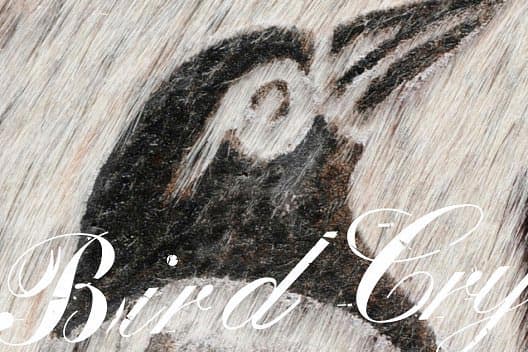 “BIRD CRY from the Grassy Box Woodlands” was an installation by visual artist Alison Clouston and musician composer Boyd that premiered at Goulburn Regional Gallery in 2009. “Bastion”, a work on cattle-hide in the collection at Goulburn, and “BIRD CRY”, an original soundtrack, are all that now remains of the work, the rest destroyed in the artists’ studio fire in the Burragorang Valley in 2010. This is a record of what was lost.

The installation drew on Colonial ornithological collections held in British Museums and the birds of the “grassy box woodland”, an Australian ecological community that is now endangered due to land degradation. It once covered vast tracts of country west of the Great Dividing Range from Victoria to Southern Queensland.

“BIRD CRY from the Grassy Box Woodlands” began as a sculptural and audible response to the birds that are part of our daily lives in the woodlands and those rarely glimpsed. Common species and the ghosts of species barely remembered or recorded by human history were presented through the filter of human culture. Four musicians were given the transcribed call of the Superb Blue Wren and a score made from onomatopoeiac and mnemonic representations of bird-calls, sourced from field guides, friends and birdwatchers. Voicing the endangered Regent Honeyeater and familiar Wrens, we included that archetype of extinctions the Dodo, and the tragic Hawaiian Mamo. Sometimes these descriptions are all that remains of a species’ call; the soundtrack thus becomes a kind of Chinese whisper across time and space and species.

In the gallery, a long descending (or ascending) bridge and pylons made of found kangaroo bones bore the wiring and speakers for the human bird cries across the space. A landscape of cowhide was rumpled like escarpment gullies and ridges or laid out as ancient threadbare plains. Bone pylons marched in line across this wrinkled topography. Parchments were branded with fossil-like images of birds, clouding the walls.